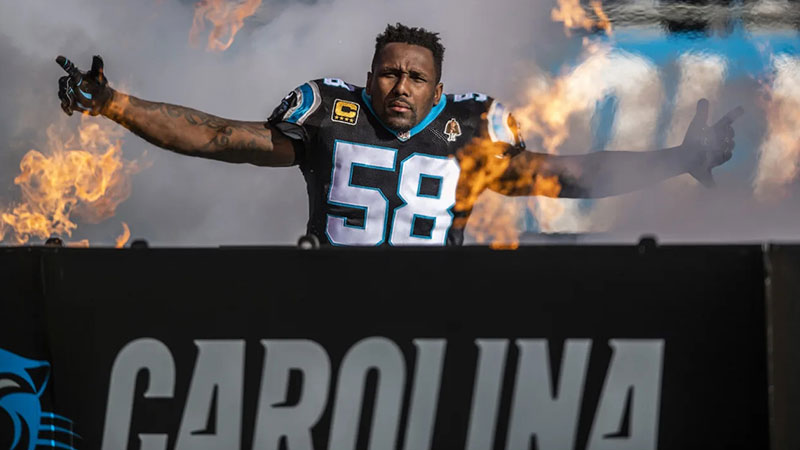 The longtime linebacker announced on his Instagram page Wednesday night that he was retiring after his release from Washington, and that he planned to sign a one-day contract to retire on March 11 as a member of the Panthers.

“To be able to play 16 years in this league has truly been a blessing, and I can’t thank God enough for seeing fit to put me in this position to do that,” Davis said. “To the Carolina fanbase, I just want to say to you guys, you guys have been tremendous throughout my entire career. I can not thank you guys enough for your love and support, …

“I can not wait to sign that one-day (contract) and retire a Panther. Keep pounding.”

Davis spent his first 14 years with the Panthers after joining the team as a first-round pick in 2005.

During that time, he made three Pro Bowls and won the NFL Walter Payton Man of the Year award, but his accomplishments transcended any statistical measure.

Davis overcame three torn ACLs — all in his right knee — but came back an even better player after years of rehab.

Before the injuries, he was the player they drafted from Georgia — fast and physical and an explosive hitter. He was an exceptional special teams player before he ever found a role on defense, but he’d find that soon enough.

Though there was some initial uncertainty about his position (he was a hybrid safety in college), he quickly found a home at linebacker and helped lead some of the league’s top defenses.

Davis was beginning to establish himself when the injuries hit in 2009, but setbacks during minicamp in 2010 and Week Two in 2011 made his football future uncertain. After all, no one had done what he was trying to do.

All he did was come back as a more complete linebacker — a craftsman instead of a mere athlete, a man whose knowledge of the game grew to compensate for anything he lost physically.

It’s somehow appropriate that all three of his Pro Bowl berths and both All-Pro honors came after the injuries — and they weren’t just sympathy votes. Outside linebackers in 4-3 defenses often lag behind in recognition since they don’t have the flashy sack numbers of their 3-4 counterparts, but what Davis did in his second act was impossible to ignore.

He came back. All the way back.

And on March 11, he’s coming back again.