Carolina Panthers’ Thomas Davis has waited for this moment

Just before kickoff for the Carolina Panthers’ 4:35 p.m. home playoff game Saturday against the Arizona Cardinals, linebacker Thomas Davis will look at his team and figure out what it needs.

This is one of Davis’ many roles. He is the last Panther to give a pregame speech – sometimes serious, sometimes emotional, always stirring.

“There’s always a message that needs to be delivered,” Davis said, “and I try to deliver it. I don’t plan ahead. It’s more passionate if you don’t. You wait for the feeling. You wait for the moment to arrive. And then you give the team what it needs.”

What the Panthers need Saturday – and what their community of fans need – is a feeling that few of them remember. The Panthers have made an unlikely run to the playoffs; now they actually need to win a playoff game for the first time in nine years. 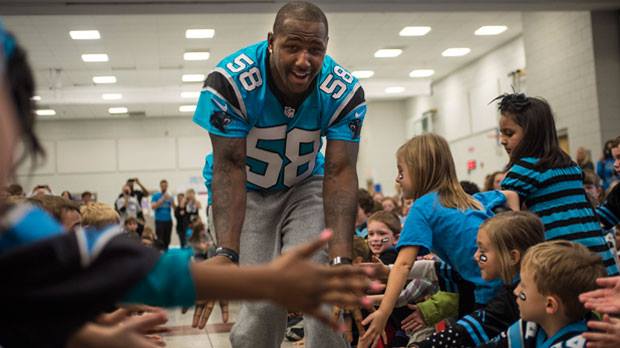 Davis, 31, is the only remaining player from the last Carolina team that won in the postseason. The 2005 Panthers squad won two straight playoff games (in Jan. 2006) before losing in the NFC championship game.

Davis was a quiet rookie then out of the University of Georgia. He didn’t start yet. He mostly played safety. His right knee was unscarred.

Now Davis is the Panthers’ longest-tenured player and one of its most respected ever. He has made millions playing the game he loves. His work in the community made him one of three national finalists for the Walter Payton Man of the Year award after the 2013 season.

Davis is also believed to be the first NFL player to successfully come back from three surgeries to repair a torn ACL. Davis has torn up the same ACL in his right knee on three separate occasions, the last time in 2011. Knee reconstruction and months of painful rehab have followed each time. He told friends and family he was going to quit after the third injury but reconsidered and has now played three full seasons on his thrice-repaired knee.

There is no player on the current team who better exemplifies the “Keep Pounding” mantra of the late Sam Mills – also a beloved Carolina linebacker – than Davis. But for all that, there’s a lot Davis still wants from his NFL career he doesn’t have.

Davis has never made the Pro Bowl, although his teammates rail against this injustice. Although his nickname and initials are “TD,” he has never scored an NFL touchdown. What would have been his first, against Atlanta last week, was called back because of a flag.

Most important, Davis said: “I’ve been here half the organization’s existence – 10 out of the Panthers’ 20 years. And we’ve never won a Super Bowl. I’ve never even won a playoff game after that rookie year. I need more time to do all the things I want to accomplish.”

Heartbeat of the team

Panther safety Roman Harper joined the team only this season after more than a decade of competing against Davis, first at the University of Alabama and then for the New Orleans Saints.

“Thomas really is the heartbeat of this defense and this team,” Harper said.

Middle linebacker Luke Kuechly gets all the awards and most of the endorsements, but Davis barely trails Kuechly in tackles this season. The two of them each have more than twice as many tackles as anyone else on the 2014 Panthers. Davis is also No. 2 on the all-time Panthers tackle list and should pass Mike Minter for No. 1 in 2015 if he has another season of this caliber.

“When he came in as a rookie we loved watching him,” said Jake Delhomme, the Panthers’ quarterback in 2005 and a teammate of Davis’ for five seasons. “He was so young and raw and fast. People forget he was drafted for one reason – to stop Michael Vick.”

Vick was Atlanta’s all-pro quarterback at the time. Davis was one of the few players fast enough to run with Vick before the quarterback’s career derailed because of injuries and off-field troubles. With Davis serving as Vick’s personal “spy” on the field, the Panthers quickly closed the gap on their NFC South rival.

Kelly Davis, Thomas’s wife, met him during his rookie season. They now have a blended family that includes four children, ages 5 to 12. Davis has a few superstitions. He won’t step on the three giant Panthers logos embedded into the locker-room carpet. “And he always wants me to take all four children to the game,” Kelly Davis said, “because we usually seem to win when I do that.”

Said Delhomme of Davis’ maturation: “He’s just the consummate pro. Thomas took care of his body – he wasn’t ever out there carousing and running the streets. And he and his wife, Kelly, have done an unbelievable job with their foundation. Thomas wants to be a model citizen.”

A Christmas without gifts

Davis and Kelly formed the Thomas Davis Defending Dreams Foundation in 2007, a nonprofit organization that serves underprivileged children with an emphasis on students in middle school. The foundation, which Kelly runs as a volunteer, has distributed more than $500,000 worth of aid since its inception, according to the Panthers. Most of the aid goes to the Charlotte area but also some to South Carolina and Georgia, which is Davis’ home state.

Davis is again Carolina’s nominee for the Walter Payton Man of the Year award, which goes to a single NFL player every year and is based on community service as well as on-field excellence. When Davis was announced as the Panthers’ nominee in November, owner Jerry Richardson issued a statement that read in part: “I have had the pleasure of watching Thomas Davis grow into the confident, mature, caring man he is today. No one takes his position of influence more seriously than Thomas on the field or in the community.”

Davis was raised by a single mother in Shellman, Ga. The poverty he faced there makes him understand the plight of the children he helps.

“I had at least two Christmases where I didn’t get a single gift,” Davis said. “I didn’t understand it. All you think as a kid is that I wasn’t good enough this year, so Santa didn’t bring me a gift. You try to figure out what you need to do better next year. … So we are trying to keep that from happening to other kids as much as we can.”

Unlike some players, Davis didn’t come into the NFL as a natural speaker. He always had a wide competitive streak, though. Even now, Davis races defensive teammates in practice to touch the ball first at the start of certain drills. “Well, it used to be a race,” Panthers coach Ron Rivera said. “Now people mostly get out of his way for that, because he’s like a bull in a china shop and he can’t stand to lose.”

But talking? Davis rarely said more than 10 words at a time as a rookie. He was prone to painful silences in front of the cameras.

“I used to count the ‘umms’ Thomas would say when he spoke,” Kelly said, “I’d say, ‘Hey, you had 17 umms in that interview.’ And now I don’t have to do that anymore because it just comes to him so naturally. He’s just become this great leader, this great speaker. People that know him call him ‘Pastor Davis’ now sometimes.”

In pregame team huddles, Rivera said, “Thomas even gets me excited.”

The coach, a former NFL linebacker himself, has always had a special place in his heart for Davis. In 2012, Rivera got so choked up during a postgame news conference describing Davis’ contributions to the team that he had to abruptly leave the podium.

“Thomas has a tremendous amount of pride in who we are,” Rivera said this week, “and he gets that across to a lot of his teammates. His best characteristic as a player is actually his loyalty – how much he loves the organization and his teammates.”

Under contract with Carolina through 2015, Davis said he would like to play through at least 2016 but that he will never play for another NFL team.

Said Davis: “I want to extend my career until the Panthers say, ‘Hey, we appreciate your service, but we can no longer use you.’ I don’t know how long that’s going to be. But I’m going to enjoy my time until that happens.”

In the meantime, he will keep running around on that scarred right knee and inspiring his teammates with his words and his play.

“The best way I can say it,” Harper said, “is that Thomas Davis is a work of art. And people around him need to appreciate him. Because like all of us, he’s not going to play forever.”

Davis will be playing Saturday, though.

“The moment is almost here,” Davis said. “I’ve been waiting a long time. And we’ll be ready.”